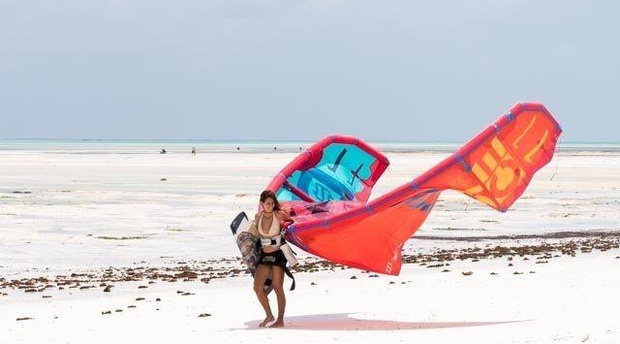 Ahh the Indian Ocean, it’s a big ocean all right. The deepest, on average, on earth.

Unlike its big cousin the pacific it isn’t complicated by a dozen swell directions. Instead, there’s just one lethal mainline – the killer southwest groundswell, born in the gales of the Roaring Forties, curving up the eastern african coast to destroy shipping on the continental fringe, spreading like jihad warriors across the ocean basin to explode on the serried ranks of coasts half the world away.

Add to that the lovely monsoon winds that average 20-35 knots creating very big swells and up to 3.5m waves on the outer reef. Standing between the wind and Zanzibar's east coast are just a few small islands, unlocked from big brother Madagascar by continental drift 100 million years before mankind’s face was seen.

At Paje Beach you’ll find consistent side-shore breezes, tropical wide sandy beaches for hassle-free launching and landing, and a choice of flat water, sandbar, lagoons or waves out on the reef making Pajes coastline the ideal place to Kite Surf and ride down-the-line on the reef break, boost massive airs or technical jumps such as toeside, rotations, raileys, deadman, and board off maneuvers